Continuing on from my last post, we entered the tunnel under the mountain that would bring us to the next fjord along, in a real blizzard.  As we emerged from the tunnel on the other side of the mountains, it was still snowing just as hard, if not harder and as we entered the town of Siglufjörður where we saw the northern lights on our previous visit , the snow was piled either side of the road, and outside the houses.  It was difficult to see but we pulled in to the car park of a convenience store.  People were scurrying in and out of the shop, bundled against the snow.  It was clear what a difficult winter the people living in the north of Iceland were having.  We picked up a few snacks and pressed on.  It was late in the afternoon and we wanted to check in to our apartment before dark.

Entering the town of Akureyri we were faced with a new challenge.  The roads were covered with a large amount of compacted snow and into that compacted snow, deep ruts had developed.  As the red light changed to green at a set of traffic lights, I accelerated away gently, then hit ruts like solid concrete.  The Jeep bucked causing me to step on the gas a little too hard.  The effect of this was quite startling, the car went into a dramatic spin and before we knew it we were sat facing the oncoming traffic, which, thankfully anticipating what was happening, had waited patiently for me to stop playing around.  They’d clearly seen it all before.  I waived rather sheepishly to the cars in the two lanes of rush hour traffic I was facing like a mexican standoff and looked for a quick exit.

I could see that my quickest route away from this busy road and to allow the traffic to start flowing again was to turn immediately right which I did.  I was tired and this was a dramatic reminder that, in these conditions, keeping the car on the road and in one piece meant not letting one’s concentration drop for a second.  A small error could have fairly major and potentially life threatening consequences.  I wonder if the angle of the lamp-post in the picture above is the result of a similar incident.

I was rapidly learning all the new skills required to drive on snow and ice, in town and out on the highway.  As it turned out, the right turn conveniently brough us almost immediately to the doorstep of the Vínbúðin, one of a chain of government-run stores that sell alcohol for consumption off premises.  The only stores licensed to do so.  This was a store I know we’d have been looking for a little later and probably struggling to find and here we were, we’d been spun around and pointed in the right direction.  Although I didn’t feel the need for a drink to calm my nerves after this salutary incident, my passenger did.. 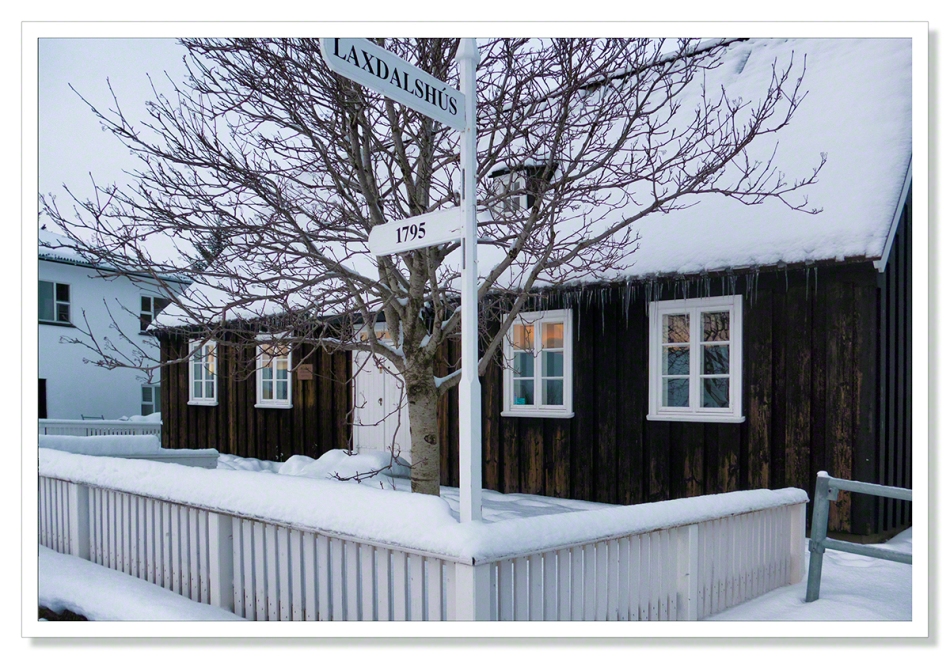 From the Vínbúðin, we listened to James (our ever-present GPS guide) and turned left and right until we pulled up outside the large house I recognised from the pictures when we booked and from Google Earth. This would be a base for the next five days, an apartment in the basement of a rather grand house in a leafy, well it would be leafy in summer, section of Akureyri.  Bags unloaded, familiarisation with heating, wi-fi, kitchen, bedrooms complete, it was a case of grab a quick meal and sleep.

Waking up the next morning, relishing the underfloor heating, I took a peek out of the window, it was first light and it looked like it was going to be a beautiful sunrise.  The winter wonderland was still there and we had waterfalls to visit.  The first on the list was Godafoss.   You’ve already seen some of my pictures taken at Godafoss. I’ve added a few more..

We had intended to visit Aldeyjarfoss, another very beautiful waterfall.  The coordinates were loaded in the GPS and after visiting Godafoss we set off.  The road to Aldeyjarfoss was little more than a dirt/ash track but it seemed to be pretty clear and we were enjoying the drive along the river.  As we turned through a farm gate, the road dipped quite steeply toward the river and it was here we came across a low loader rescuing a 4×4 from a very deep snow drift.  The chap being rescued was Icelandic, he said he visited the waterfall the previous winter without any problems but the snow this year had beaten him.  I was quietly glad that he’d gone first.  We reversed and set off back towards Akureyri.  This can be an issue with visiting Iceland in the winter.  You can’t necessarily get to see all you want to as roads, especially mountain roads are frequently impassable and if there are no dwellings along these roads, they won’t be cleared.. 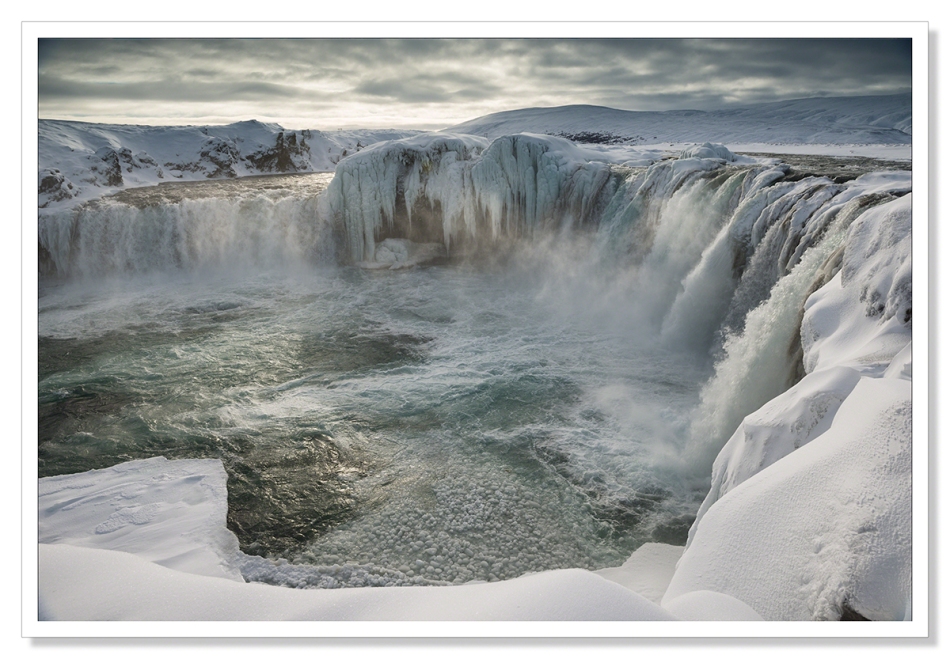