From Akureyri, our onward journey would take us to Höfn, pronounced hup.  So far as I can tell, to get close to the right pronunciation of this little town, you need to say hup as in up while inhaling sharply.  Höfn is in the south-east of Iceland and would mark the three-quarters of the way around the island point in our circumnavigation of the island of Iceland.

Thankfully weather conditions had calmed down but the roads were still quite treacherous.  We split the journey in two, opting to stay one night in some apartments right on the coast at Seydisfjordur.  Unfortunately, at the last minute, our bookings were cancelled due to some filming going on at the harbour.  We were relocated to a hotel at Egilsstaðir.

Writing an email of  complaint in response to the cancellation, I pointed out that one of the reasons for booking an apartment was so that we could cater for ourselves rather than face expensive restaurant bills.  I was on a budget.  I was rewarded with an email back saying that the hotel room would now include dinner and breakfast.  This was a good result and actually quite a nice interlude in our journey around the island. We had a delicious 3 course meal at the hotel and the breakfast the following morning wasn’t bad either. 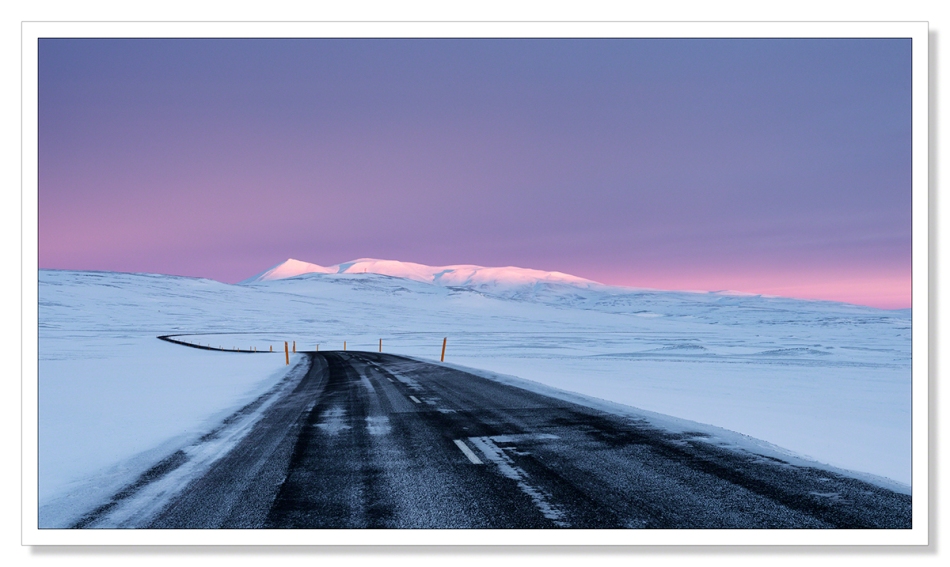 Committing to the journey south meant accepting that I wasn’t going to see Dettifoss.  We’d tried to get there a few days before setting off for Höfn.  The waterfall is immense.  There is more water tumbles over this waterfall than any other in Europe and it’s a pretty magnificent sight.  The road to the falls was marked as impassable on the Icelandic Road and Coastal Administration website.  We wondered if perhaps the road was impassable along its entire length but perhaps passable as far as the falls.  Programming the location into our GPS we’d set of.

After about half a mile, we’d come across a couple with suitcases and bags walking towards us.  Looking beyond the couple, 2 or 300 hundred yards further back, we could see a VW Golf firmly buried in a snow drift.  They’d clearly given up trying to get the car out and were heading back to the main road with all their belongings, abandoning the car. 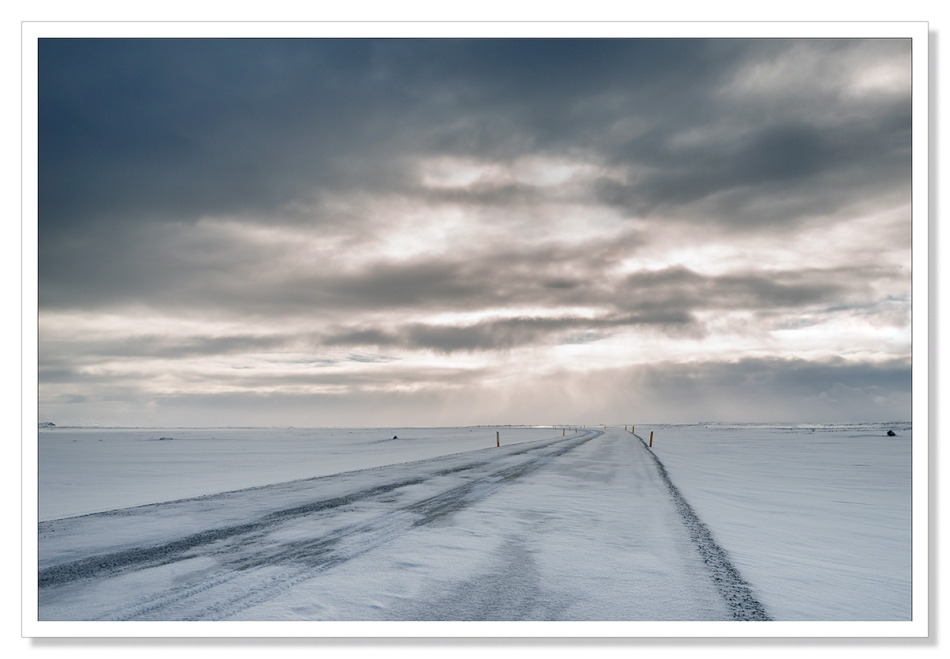 Before setting off on that particular day, I’d seen a shovel outside our apartment for clearing the step and I’d thought that if we were going to tackle an impassable road, a shovel might come in handy.  It did, we were able to dig this couple’s Golf out of  the hole they’d dug themselves into.  They were naturally very grateful, thanking us many times as they packed their belongings back into their car.

Free of the snow, they turned around and drove off toward the main road before stopping and turning around again, driving towards us once more.  The young lady got out of the car and came running towards us ‘Are you going to Dettifoss?’ she asked.  That was still our plan despite this snow drift.  We were in a 4×4 Jeep Grand Cherokee, they were in a front wheel drive Golf.  No match for the conditions.

She clearly thought that perhaps if we made tracks for them to follow, they might make it through.  We weren’t sure if we’d make it through ourselves yet and feeling a little guilty, I’d replied that we weren’t sure.  They  were lining themselves up to get stuck again but having a Jeep in the lead with a shovel, perhaps this wouldn’t matter.  We though that perhaps it would.  She returned to the car.  We could see them having an earnest discussion.  The man shaking his head, the woman appearing to plead.  He clearly made a convincing and sensible argument and after a few minutes they set off again, back toward to main road.

The drift the Golf had been buried in was deep but we made it though and pressed on.  We drove through drift after drift but each time we hit a drift, we could see clear road the other side of the deep snow.  After a while though, we came a section of the road where the snow was considerably deeper, getting on for two and three feet,  as far as we could see.  No patches of road surface visible anywhere.

Once you hit snow that is deeper than the clearance of your chassis, you start to ask rather a lot of your vehicle.  We were able to plough through short sections of deeper snow by keeping up momentum but we figured we were going to be asking a lot of the Jeep to tackle what lay ahead.  With snow showers clearly visible all around us.  We admitted defeat and turned around.  We’d done well.  It was just a km or so to the falls.

If not for my MS we would have hiked to the falls for sure.  It was very disappointing but to a certain extent, this was the price we paid for travelling to Iceland in winter.  We’d turned back several times prior to this.  We’d had doubts, turned around, driven a while only to overcome those doubts and to turn around only to drive on for a while before fresh doubts set it.  Anyone observing might have found our antics rather comical.  We might have been braver but back at the main road, there was a sign saying that there was no 122 service on this road.  No mobile phone signal, no tracking service.  If we’d got stuck, I wouldn’t have been able to walk out and we wouldn’t have been able to phone for help.  We made the right decision to visit Dettifoss another time.

Here’s a short clip of our drive back to the main road.  A couple of the more minor drifts of snow we encountered along the way..

Below are some pictures I took on our drive to Höfn.  When I saw the blue barn below followed shortly after by a blue church, I wondered if the farmer, and those in charge of the maintenance of the little church had taken advantage of the same deal on paint at Iceland’s equivalent of B&Q or Home Depot.  A good colour choice all round I’d say. 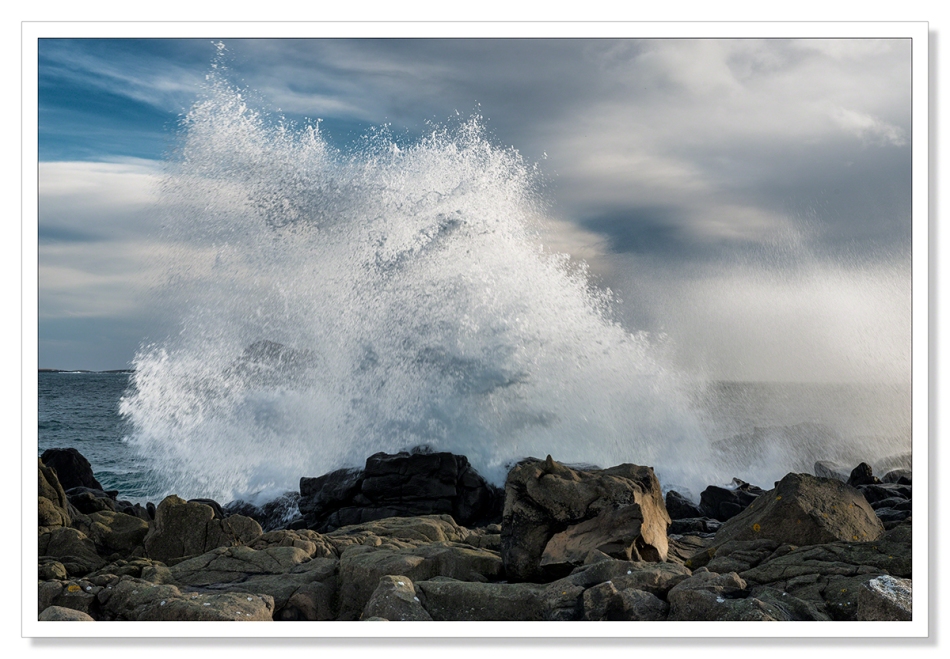 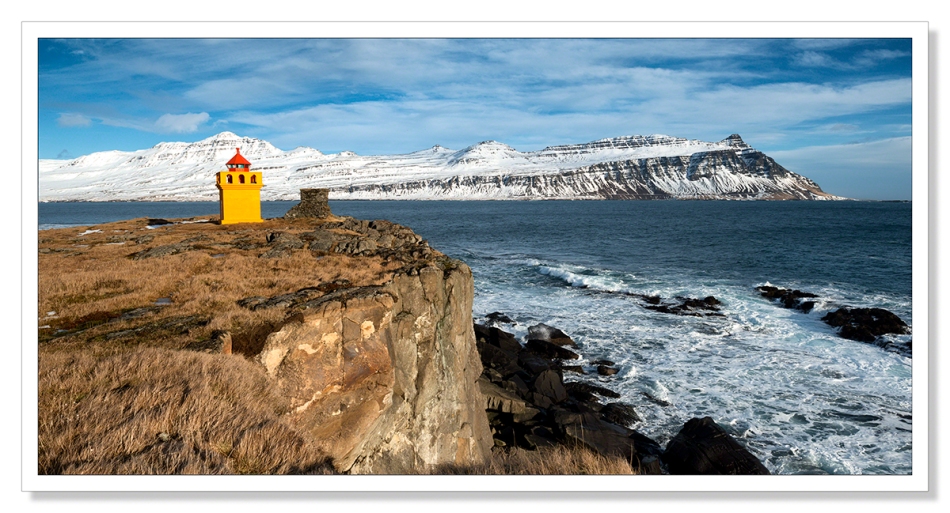 When I took this final picture, it was one of only a very few occasions when standing in the middle of the main road the runs around Iceland taking photos, that a car actually came along.  I was quite glad when this one did.  I definitely think the car, with headlights blazing, adds to the image.  I hope you enjoy the images.