On Wednesday night, the Icelandic Met Office Aurora forecast was ‘Severe’.  This was as high as the scale goes and I’d never seen it at anything above ‘Very Active’.  I’m not sure why they should use the word ‘severe’ when talking about the aurora but I guess it must have something to do with the potential for disruption to communications that comes with solar flares.

The weather here in Iceland had been awful all day.  But ever hopeful, after dinner I set off for Grotta Lighthouse in the west of Reykjavik.  As I pulled into the car park and looked up, the clouds parted momentarily to give me a taste of what might be before closing in again.  The rain started and I thought that was it.  My one chance at a really decent show of the Aurora Borealis and the weather was not playing ball.

On a hunch, I left Grotta Lighthouse (to be honest I wasn’t too happy with the level of orange sodium light pollution from the city) and I set of for the most westerly point I could think of that wasn’t too far out from Reykjavik.  The point I had in mind was the small town of Gardur, not far from Keflavik Airport.  I knew there was a lighthouse there as well as a daymark complete with the traditional red stripes.  I figured if I could get beyond the terrible weather, this would make a good foreground subject while I waited to see what a ‘severe’ show of the Northern Lights might reveal.

It rained all the way to Keflavik, it was only as I pulled into Gardur that the rain appeared to be stopping.  I drove through a town all tucked up for the night to the lighthouse and daymark where, not surprisingly, I found several photographers with tripods set and looking skyward hopefully.

I couldn’t get near the daymark for the other photographers so I set up on the beach and waited.  It wasn’t long before the clouds thinned and I could see stars.  Shortly thereafter, I was witness to one of nature’s most mesmerizing light shows.  It started quite gently, just along the beach..

And went on from there..

It wasn’t long before it started to rain again.  It was about 1am and I was considering heading home as indeed the other photographers appeared to be doing.  I hung back though, once again on a hunch and waited.  The skies cleared shortly thereafter and with the ‘competition’ gone, I could finally set up the shot I’d had in my mind’s eye before arriving in Gardur.

What I hadn’t bargained for was quite how intense the light show turned out to be and I certainly hadn’t imagined being able to capture the aurora and the Milky Way in the same shot but there it was.  I was so glad I hadn’t given up.. 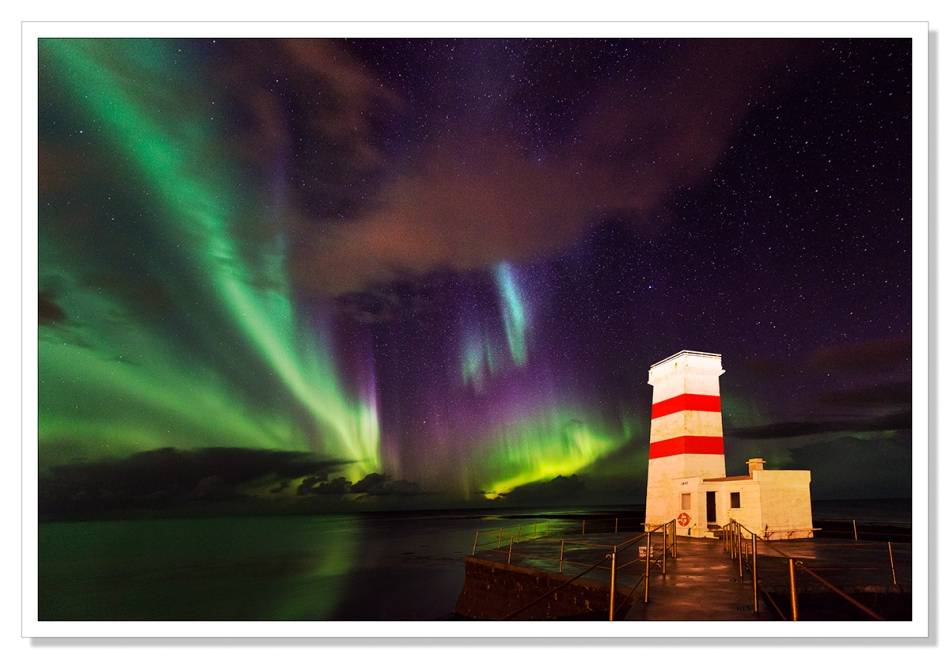 I’ve only just started going through the many photographs I took that night.  These are just a few examples, I’m sure I’ll be posting more along the way.  The skies were not completely clear as you can see but I was quite pleased, the clouds really added something rather than detracted I think.. :-)

This entry was posted on October 10, 2015 by Chillbrook. It was filed under Photography, Photography and Travel and was tagged with Adrian Theze, Aurora Borealis, Iceland, Landscape Photography, Nikon D800e, Northern Lights, Photography, Seascape.