The most southerly point..

I spent some time at the most southerly point in Iceland on a couple of occasions.  It’s beautiful, wild, put simply, stunning.  The first time we stopped by was at the end of a long day visiting waterfalls. I saw a road that appeared to lead to the beach so I took it.  This road seemed to be a sort of causeway between two large bodies of water, leading to a large mass of rock jutting out into the ocean.  This is the view from the top.. 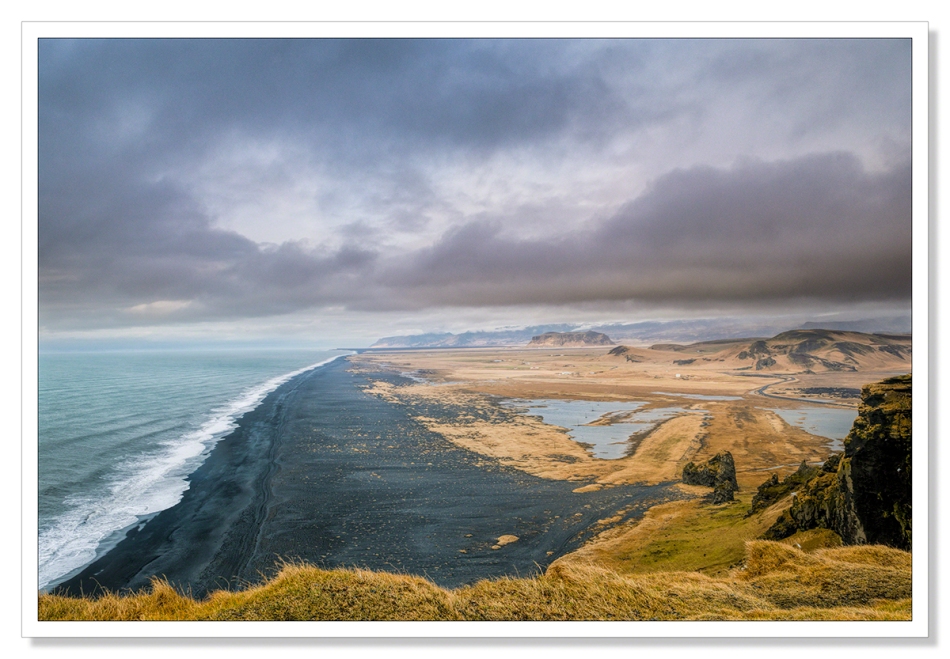 This is an ideal place from which to watch puffins apparently but puffins spend the winter at sea so no sign of them.

This might be a good time to talk about cloud.  The Icelandic Meteorological Office forecast three levels of cloud.  Low level, mid level and high level.  It’s the high level cloud that keeps the sunshine milky, it’s the mid level cloud that delivers the rain/sleet and snow apparently and the low level cloud, this hovers around 3 inches off the ground and we got to experience all three sorts most days during our trip in Iceland.   Having seen the view from the most southerly tip, I was keen to visit again at dawn for a sunrise perhaps.  I wanted to take pictures of the lighthouse too so would kill two birds to coin a phrase.  With plans to return the following day, I was content with the picture I took above.

Returning at dawn the following day (remember first light is around 8.30 – 9 am at this time of year) it felt like I was visiting Cape Horn, that other most southerly point, infamous for its stormy seas and violent weather.  As first light appeared, a severe gale was blowing and it was pouring with rain.  We were definitely experiencing that 3 inches above the ground cloud I mentioned along with the other two I think.  Here’s the lighthouse, I took the shot as the mist and cloud cleared for a second or two and I was able to wipe the rain droplets from my lens.. 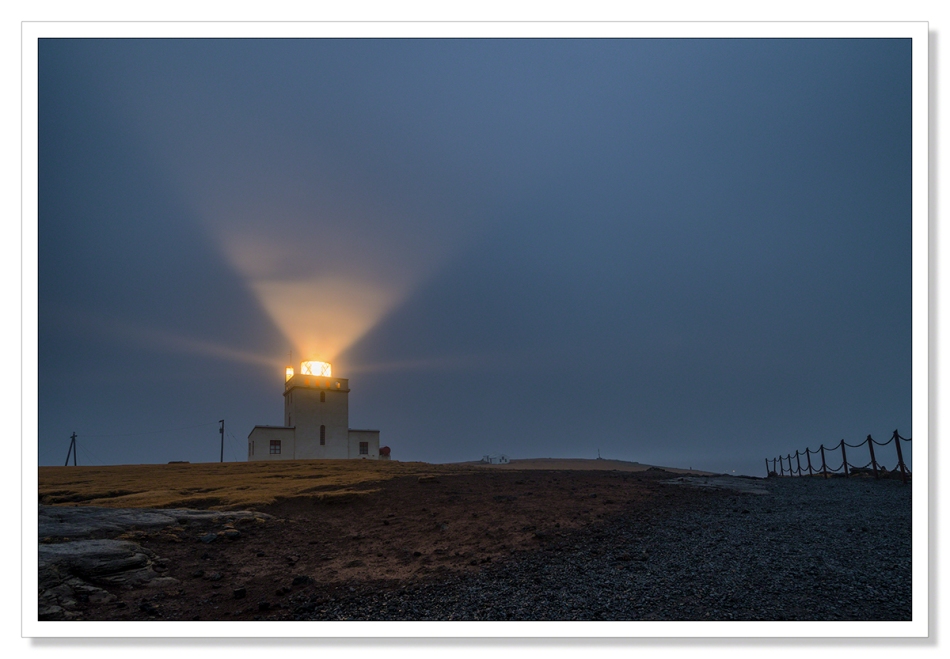 Standing on the edge of a friable, crumbling clifftop in a howling gale, the ‘low cloud’ threatening to envelop me once more and with the rain hitting me, and my lens, full in the face, I was determined to get a picture of the rocks that makes this a popular place to visit.

To get the shot I increased the aperture from my usual f/11 to f/5.6 in an attempt to decrease the shutter speed required to get a good exposure. By getting more light to the sensor, the length of time the shutter would need to be open would be decreased. The less time the shutter was open, the less chance the lens, after a quick wipe, would be splattered with water by the time the picture was taken.  I was still needing a shutter speed of 3 seconds as the light levels were so low and to be honest I didn’t expect to get a picture. Taking lots of pictures in Cornwall over the last couple of years had prepared me well however.  This is the only picture I took that doesn’t bear the tell tale signs of water on the lens. It’s nothing to write home about but it’s a picture taken under extreme conditions.  . ;-) 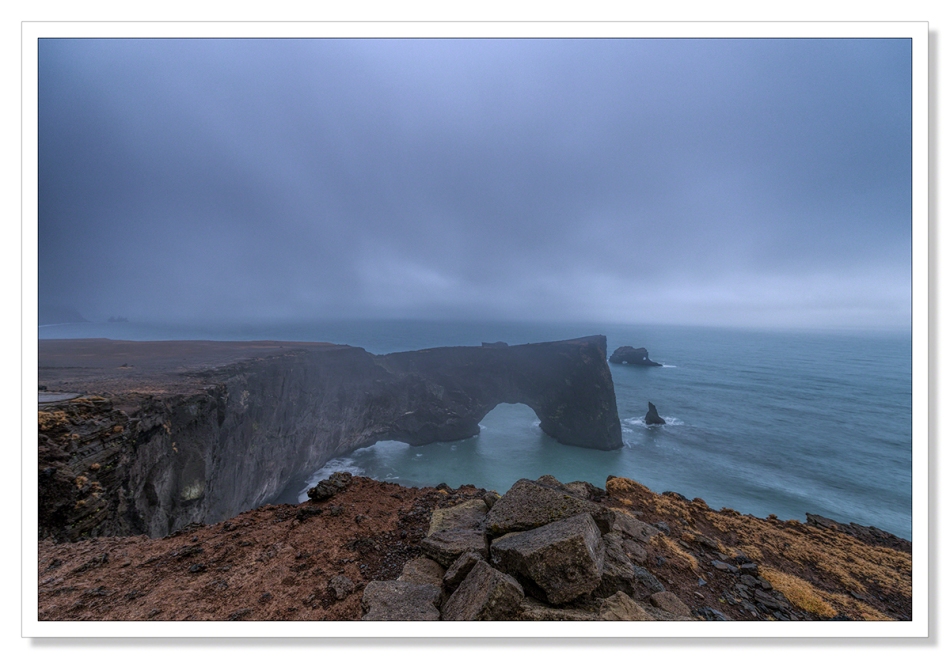 Clearly we were not going to get a lovely sunrise so decided to push on to our next destination.  On the way down the view east became clear, momentarily, well sort of.  Appearing just like the Loe Bar in Cornwall, this bank of sand and shingle separates the ocean from a fresh water lake. 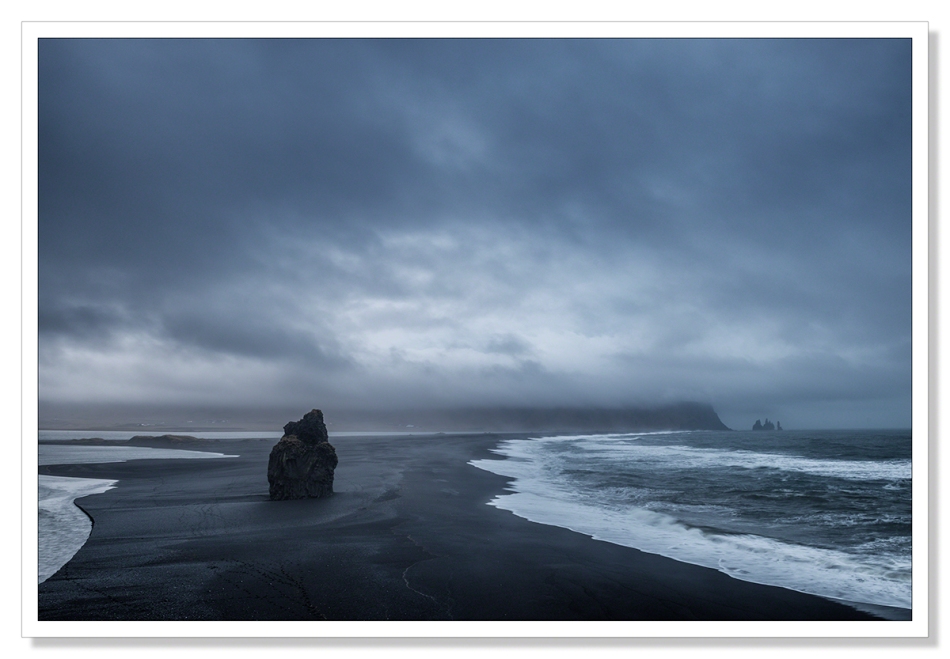 This was the worst day of weather we had in Iceland.  From here on in, I spent time each evening studying forecasts and satellite images and planning our excursions according to where the better weather was likely to be and it worked out well..

Click on the pictures for a clearer sharper view..

Penrose and the Loe Bar..

I mentioned the Loe Bar in my recent post, Porthleven and this is a follow-up to explain what the Loe Bar is all about.

The Loe or Loe Pool is the largest body of fresh water in Cornwall and hides what was once a valley formed by the estuary of the River Cober.  When sea levels rose during the Holocene period, the Loe Pool formed when the estuary became blocked by a the actions of the sea that created a bar of sand and shingle creating a natural dam, blocking the estuary.  At least that’s one theory as to the age and creation of the pool..

The drowned river valley, a geographical phenomenon known as a Ria, extends several miles out to sea.    The bank of sand that blocked the estuary leading to the formation of the Loe or Loe Pool is known as the Loe Bar. It is thought that Longshore Drift plays an important part in the maintenance of the Bar, with a strong current flowing to the south-east from Porthleven to Gunwalloe, depositing shingle along the Bar. The ebb flow is not a simple reverse flow and is not strong enough to remove all the deposits.  Yesterday, I had an appointment with my printer to view some proofs and with the Penrose Estate not very far away, it was the perfect opportunity to go and take a look. 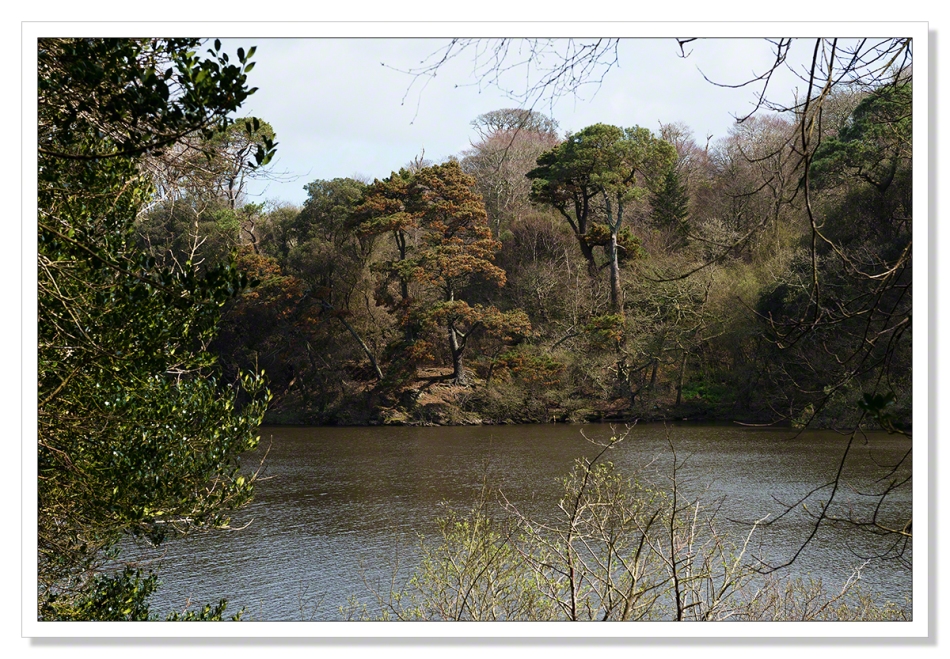 The Penrose Estate and the Loe Pool are beautiful and I have Laura to thank, one of the National Trust rangers at the Penrose Estate, and Countryside Mobility South West, for making it possible for me to see it.  Countryside Mobility South West are a National Lottery funded charity, working to make the countryside more accessible to disabled people.  One way they do this is to provide Tramper mobility scooters to organisations willing to join the scheme.  They also have specially adapted boats on several lakes around the county that allow for a wheelchair to be wheeled aboard.

The tramper scooters are the mobility scooter equivalent of an off-road 4×4 and are able to handle pretty much whatever you throw at them in terms of rough and steep terrain.  This makes it possible for disabled people like myself to gain access to places our wheelchairs wouldn’t allow use to get to normally.

With an eye-watering top of 4 miles per hour I set off for the Loe Bar.  The trail was rough and fairly steep in places but I suspect my wheelchair would have handled the trail but with it being so rough, I think it would have drained my battery fairly quickly and the worry of running out of juice is not one you want when you’re out to enjoy a beautiful spring afternoon in a very beautiful place.  I had no such worry with the tramper.

The Loe Pool is long and thin as you would expect from a flooded valley, and as you follow its banks you’re treated to some beautiful views.  I could smell the sea however and I was itching to get to the Loe Bar.  This is what I saw when I got there.. 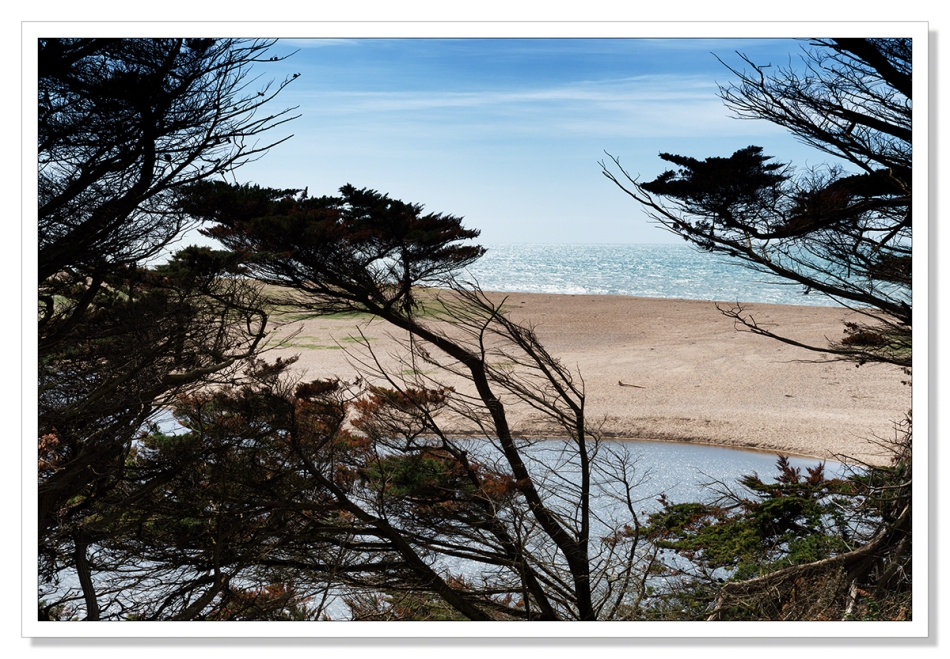 Cornwall produces tons of daffodils for distribution around the country and for export and at this time of year and particularly in this part of Cornwall, you see many fields of daffodils just waiting to be picked, just like in the pictures below.. 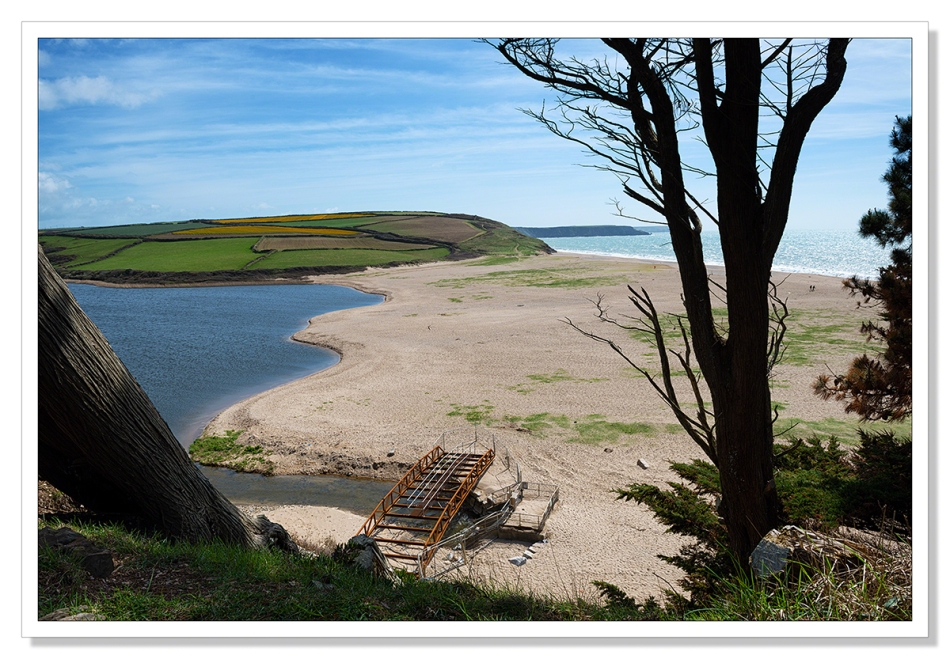 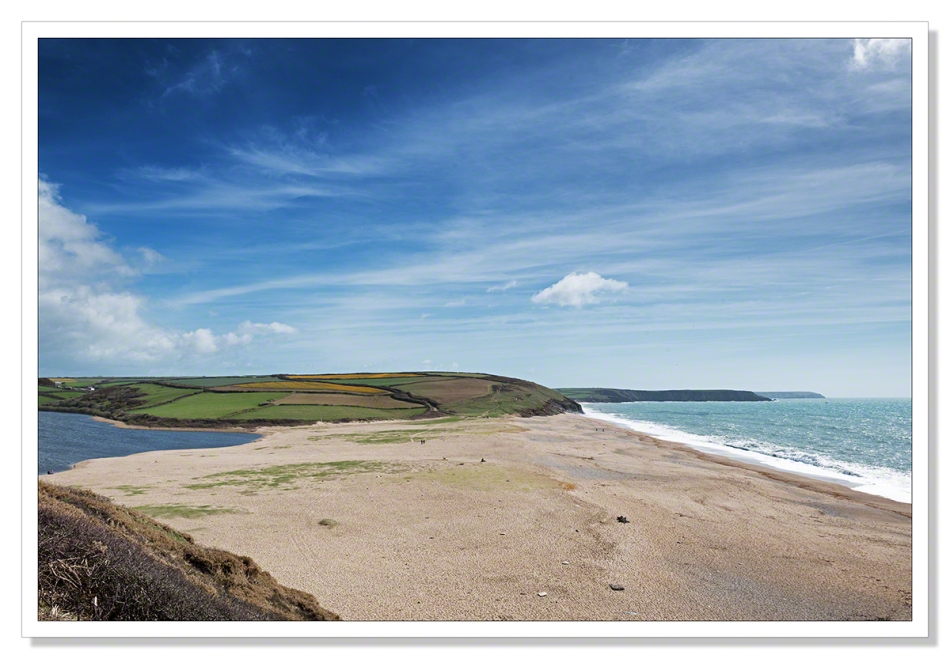 With the Easter holidays starting this week, is was nice to see people out enjoying the fine weather.  These boys on their bikes were racing ahead of mum and dad, dawdling behind.. 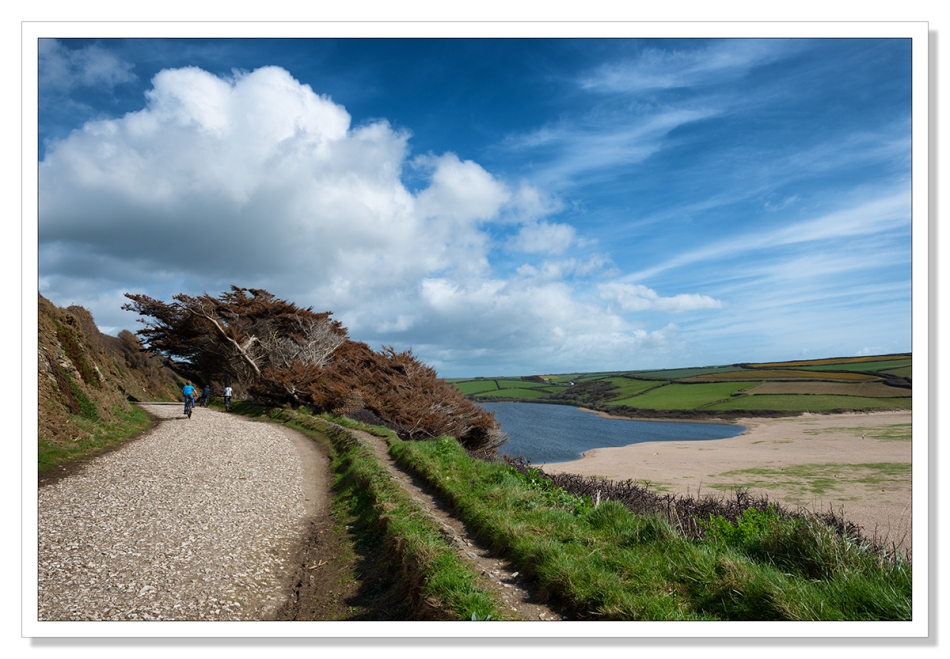 On occasion, to prevent flooding in up river Helston, the bar has been breached, a practice known locally as ‘cutting’, to allow much more of the fresh water to flow out to sea.  The bar has always naturally resealed itself.